5G can be implemented in multiple ways, three of which are most prominent and are being targeted by the major operators in the United States. 5G speeds depend on the distance from the tower and it greatly reduces after 1km. 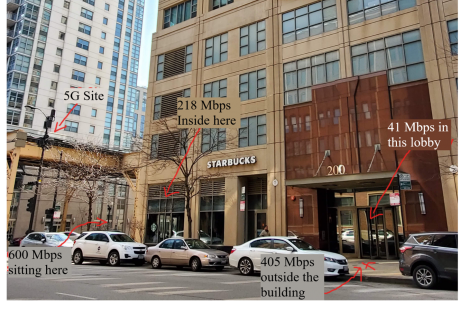 5G Speeds Based on Distance Away From Site

PCMag has another interesting scenario about 5G speeds when it conducted a live testing at Michigan Avenue in Chicago. 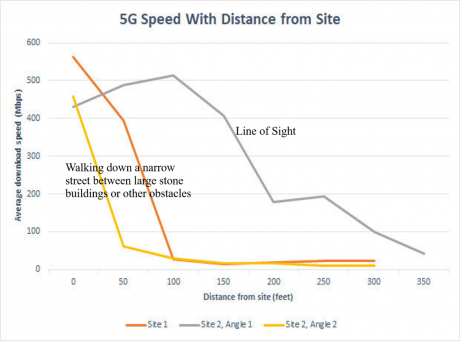 As shown above, the average download speed deteriorates to less than 50 Mbps when the distance from the site exceeds 50 to 100 feet (15m to 30m). This goes to show that multiple, low-height towers would likely be a mandatory requirement of 5G.

5G Types and Their Adopters

The four major US operators – AT&T, Verizon, T-Mobile and Sprint – have their own plans on building 5G networks for their customer bases. Their strategies are based on their existing wireless spectrum holdings as well as their future plans on fibre deployment to the tower which is necessary for building the fastest 5G type.

The following is a summary of 5G types and their adopters:

The high-band is about 10x faster than 4G LTE with extremely low latency, allowing individual messages to be transmitted almost instantaneously. However, the speed deteriorates rapidly as distance from the tower increases.

The mid-band is about 6x faster than 4G LTE. However, it has a smaller footprint than low-band.

The low-band is about 20 percent faster than 4G LTE.

These bands can also be illustrated in the following figure:

In a 4G network, a 4GB file download typically takes over 5 minutes (with a 100 Mbps connection). On a 5G network of mmWave high-band type, the same file would only take 32 seconds (with a 1Gbps connection). However, according to PCMag, this speed can only be achieved if the distance from the tower is less than 80 feet (25m).

Another advantage of the mmWave high-band 5G is its extremely low latency. This feature is especially useful in self-driving cars and online gaming, where spontaneous response is mandatory.

However, the mmWave high-band 5G is being rolled out by operators in very limited areas such as stadiums, arenas and other highly dense areas. Most of the other rollouts will be of mid-band or low-band type, which provide reasonable coverage but not extremely fast speeds.

Follow us on LinkedIn to stay tuned to our weekly updates of the latest developments in the Telecom/IT industry and popular courses that we offer.